Let’s start by making one distinction very clear. Shepherd’s Pie is made with lamb. Not lamb or beef. Cottage Pie is made with beef. Simple, but it needs to be understood. That distinction is not always made clear, especially on the American side of the pond. Beyond that, there are differences in flavorings and how they are made. This posting presents an analysis of Shepherd’s and Cottage pies to reveal those differences.

Like many, I have found a beer and a Shepherd’s Pie in a London pub to be great after a hard day of work. But yet back home, I realized I made and enjoyed similar dishes, but felt there were some differences I needed to understand better. Seeking to understand the differences, I was determined to refine my preferences. I did increase my understanding, but I did not settle on a preference. At this point, I appreciate them all.

I performed four recipe searches using the terms “Shepherd’s Pie Recipes” and “Cottage Pie Recipes”. The searches were done once setting the location of the search from London in the U.K. and again setting for Atlanta, Georgia in the U.S. While this approach is not guaranteed to give recipes based in each location, it is what a user would be served up as approaches to cook the dishes. And indeed differences were found.

I used the top recipes returned from the search that were consistent with the use of the names of Shepherd and Cottage pies. I ignored vegetarian options for another day, as well as, those authors that appeared to be completely indifferent to the types of meats used.

The tomatoes require a bit more cooking but produce a richer pie. 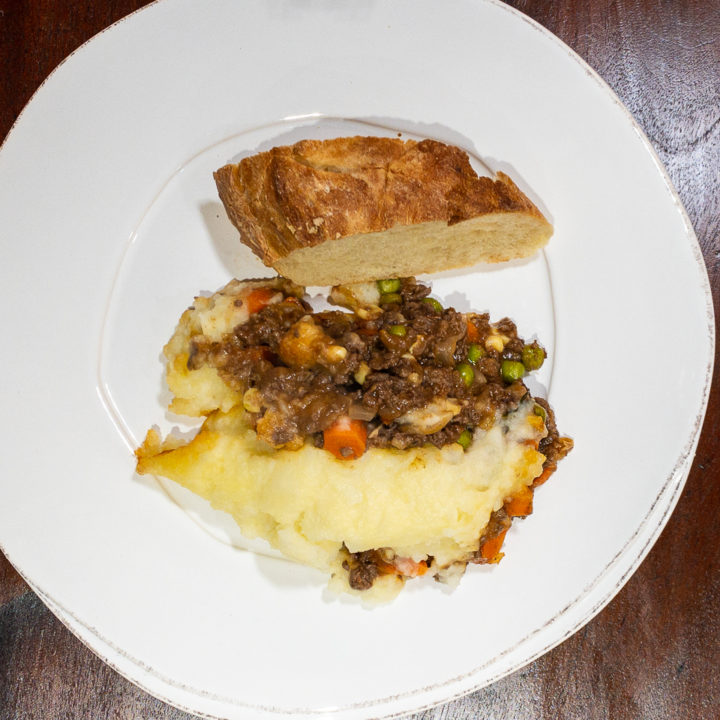 Cottage Pie - With an American Twist

A slightly different take on this classic comfort food.

The Mushrooms give a completely different taste profile to Cottage Pie.

The pies are all meats stewed with onions and (usually) garlic and then other vegetables. The stew is, of course, topped with mashed potatoes and baked till bubbly and steamy. It is the choice of vegetables and the flavors that create the differences.

Additionally, almost all of the recipes included some form of tomatoes. Fresh or canned tomatoes required more cooking and changes the techniques a bit. Each of these concepts is discussed below.

Onions are always simmered to start the stew. Garlic is almost always included. The three basics additions of Carrots, Peas and Corn best show the similarities and differences in the approaches.

It is clear that carrots are used across the board. Over 80% of the recipes in all conditions used them.

Peas provided a bit of a surprise. While frequently used in the recipes from the Atlanta search, they were much less common (< 40%) in the London search. A simple reason for this is the prevalence of peas as a side dish in British pubs. This logically makes them optional.

Stylistically the biggest difference found in the location searches was the form of the tomatoes for the stew.

In the Atlanta references, far more frequently tomato paste is used. Rich tasting and a bit quicker to prepare the stew.

In the London references, canned diced tomatoes or a tomato purée (in the U.S. tomato sauce) was used. This requires more cooking of the stew leading to a richer flavor. This was also used frequently along with mushrooms and/or red wine. Again, requiring a bit more cooking (15 to 20 minutes of stewing) and resulting in richer flavors. This technique is featured in my Cottage Pie with Chanterelle Mushrooms and my Shepherd’s Pie with Tomatoes.

Worcestershire Sauce is the iconic taste of Shepherd’s or Cottage pie to this researcher. I was surprised to see it is only used in a little over 60% of the pies from the London search. I recommend it in all of my pies. Of note, it is more common in the Atlanta recipes, than the London references.

Red wine simmered into the sauce is not common, but a good variation on the theme. I have added it to all of my recipes, but could be considered optional.

Lastly, mushrooms do not necessarily come to mind for the classic pies. But they do work quite well. See my Cottage Pie with Chanterelle Mushrooms for example.

The preferred herb for both pies is thyme. Rosemary is more frequently mentioned for Shepherd’s pies. Frankly, they both work. I suggest you use whichever is freshest and best.

The techniques of Cottage and Sheppard Pie’s are similar. The only important difference revealed by the research is related to the tomatoes. These do require more simmering. This offers the additional benefit of allowing mushrooms to be added softened as well as cooking down the wine.

A minor note is a thought that you might add your carrots later in the cooking, or remove while simmering the tomatoes to prevent overcooking.